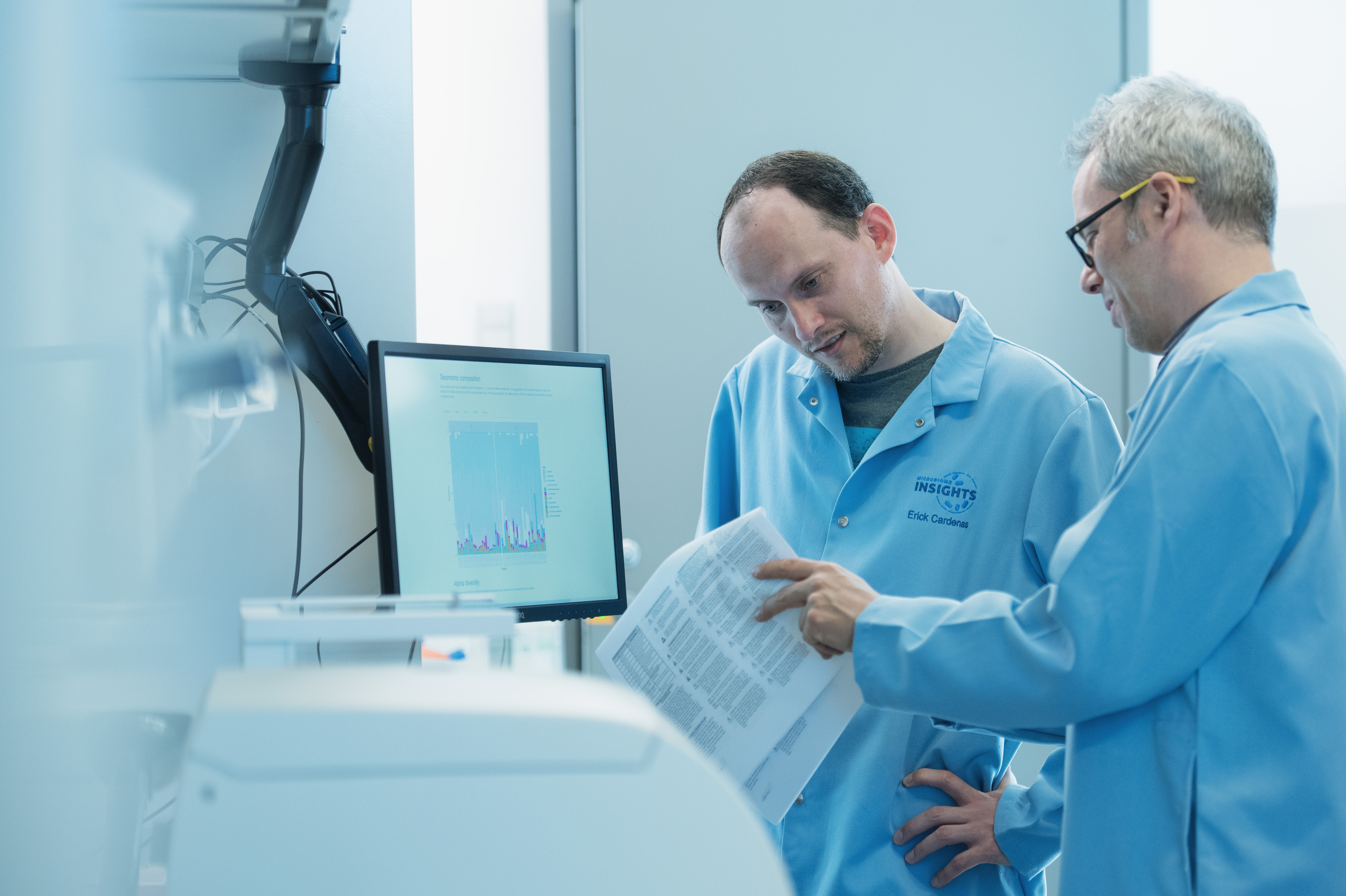 Humans are unable to digest the bulk of dietary fibres without the help of anaerobic bacterial populations that convert the indigestible compounds to a form we are readily able to use. Short-chain fatty acids (SCFAs) are bioactive molecules that are a metabolic by-product of bacterial fermentation of dietary fibres, resistant starches, and certain proteins; they are produced in the lower intestine.

SCFAs are a group of saturated aliphatic fatty acid molecules that contain less than six carbon (C) atoms, and may exist in either a straight or branched conformation. Acetate (C2), propionate (C3), and butyrate (C4) are the most abundant SCFAs in the body, comprising 90-95% of the total SCFAs found in the colon.

In vivo concentrations of SCFAs appear to be dynamic and are dependent on the rates of production, intraluminal diffusion, and metabolism. SCFA production is influenced by the species and abundance of microorganisms present in the colon, dietary sources of substrate, transit time of food moving through the digestive system, as well as cross-feeding mechanisms. Cross-feeding mechanisms “consist either in the utilization of end products from the metabolism of a given microorganism by another one, called metabolic cross-feeding, and/or the utilization by one microorganism of the energy rich complex [carbohydrate] breakdown products formed by another one, called substrate cross-feeding”. For example, in the human colon, butyrate-producing bacteria of the Bifidobacterium and Faecalibacterium genera may use acetate to synthesize butyrate. As it is nearly impossible to measure in vivo SCFA production rates in humans, most studies on SCFA production use animal models or in vitro models.

Beyond production of SCFAs, there’s the matter of absorption: 95% of SCFAs produced in the cecum and large intestine are rapidly absorbed, while the remaining 5% are excreted in feces. Due to the difficulty accessing the human colon, estimates of luminal SCFA concentrations are based on studies using the intestinal contents of sudden-death victims, as well as stomal effluent of colostomy patients. From these studies, total SCFA concentrations in the sigmoid colon are found to be similar to stool. Many studies indeed use stool samples for assessing SCFA concentrations, while knowing this represents only a small fraction of what was likely produced in the entire colon. It is worth noting that while many studies use fecal SCFA concentrations and/or ratios as a non-invasive estimate of luminal values, neither represent the rate of SCFA production or absorption. Without knowledge of SCFA production, it has been posited that “it is too dangerous to speculate effect(s) of SCFAs based on the correlation between lumen or fecal SCFA concentrations and physiologic effects or symptoms”. While a correlation does not imply causation, knowing how SCFA concentrations correlate with health effects is still worthwhile: correlations found in human populations can be further interrogated in model systems to decipher possible mechanisms.

SCFAs may be an integral link between diet, gut microbiota, and human health – and much research has been conducted trying to decipher the complex interactions and determine mechanisms of action. SCFAs have numerous mechanistic links to host health, and may play important roles in energy metabolism, promotion of satiety, maintenance of gut barrier function, immune function, anti-inflammatory responses, and colon carcinogenesis. They are readily absorbed through the colonic lumen and account for roughly 10% of the daily caloric intake. Beneficially, they may reduce plasma free fatty acids, cholesterol, and glucose levels. SCFAs act as an energy source for coloncytes via β-oxidation, as well as influence cell proliferation rates by releasing growth factors, modulating mucosal blood flow, and through genes involved with the cell cycle. Gut barrier function may be improved by influencing mucin secretion, assembly of tight junction proteins, and stabilization of transcription factors. By strengthening the gut barrier, SCFAs, particularly butyrate, may block the translocation of lipopolysaccharide, which is a potent pro-inflammatory molecule. Additionally, SCFAs may be protective against some host diseases, such as digestive disorders, colon cancer, and diabetes.

With Western diets being notoriously low in fiber content, it is imperative to understand the connection between diet, SCFA content, and health. Diet affects the gut microbiome composition and activity, which influences the SCFAs produced, and can have an impact on host health. In rats, cecal concentrations of SCFAs were influenced by both dietary fiber type (such as wheat starch versus inulin), as well as daily fiber intake. Different types of fibers altered the ratio of SCFAs produced. For example, inulin favoured production of propionate and butyrate, rather than acetate.

While SCFAs have a general reputation for being markers of good health, studies actually show conflicting results regarding fecal SCFA concentrations and health status. High fiber-low fat diets are characterized by higher levels of fecal SCFAs than diets with reduced fiber intakes. In colorectal adenocarcinoma patients, fecal butyrate is reduced, whilst in those with obesity total SCFA fecal concentrations are typically increased. In a recent 2019 study in Nutrients, the authors found, somewhat surprisingly, that fecal SCFA concentrations were inversely associated with gut microbial diversity (which is generally associated with better health); higher fecal SCFA concentrations were associated with markers for gut permeability, metabolic dysregulation, obesity, and hypertension. This may be due to less efficient SCFA absorption. Overall, the complex nature of the interactions and the difficulty in controlling confounding variables in human studies mean that further studies are needed to pin down the association between SCFAs and health.

Both ulcerative colitis and Crohn’s disease are characterized by chronic bowel inflammation, and butyrate, with its anti-inflammatory properties, has been explored to treat these inflammatory bowel diseases. A study using a mouse model showed butyrate supplements reduced bowel inflammation. Conversely, lower levels of total SCFAs were associated with worse colitis symptoms.

Irritable bowel syndrome (IBS) is a common gastrointestinal disorder that is diagnosed from accepted symptom-based criteria, as well as the exclusion of other organic diseases. Since multiple disorders have similar symptoms, it is notoriously difficult to accurately diagnose. In a study by Per Farup and colleagues, the researchers found promising data to support the use of fecal SCFAs as a non-invasive biomarker for the differentiation of IBS patients from healthy volunteers.

Studies with humans provide mixed results, with some studies showing an association between high-fiber diets and reduced cancer risk, and others showing no link.

Summarized in a review article, evidence suggests butyrate and other SCFAs can aid both humans and animals with type 2 diabetes via immunometabolic effects. 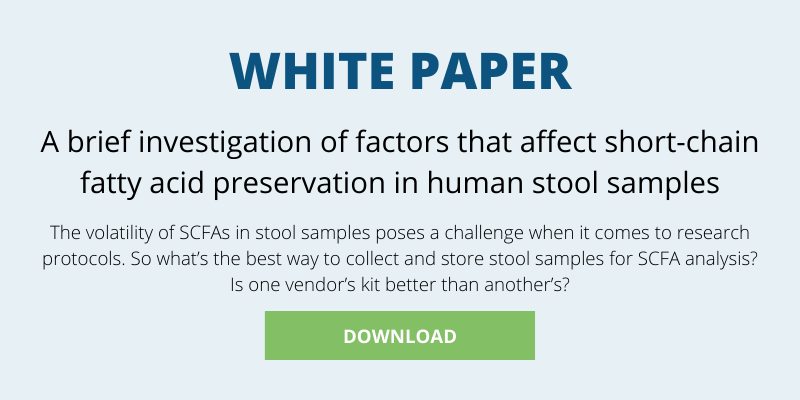 Microbiome Insights, Inc. is a global leader providing end-to-end microbiome sequencing and comprehensive bioinformatic analysis. The company is headquartered in Vancouver, Canada where samples from around the world are processed in its College of American Pathologist (CAP) accredited laboratory. Working with clients from pharma, biotech, nutrition, cosmetic and agriculture companies as well as with world leading academic and government research institutions, MBI has supported over 670 microbiome studies from basic research to commercial R&D and clinical trials. The company's team of expert bioinformaticians and data scientists deliver industry leading insights including biomarker discovery, machine-learning based modelling and customized bioinformatics analysis.